The term “volunteer work” gets a bad rap. I’ve rarely provided any allegedly unselfish service to others that didn’t end up giving me a greater reward than I gave. Today was no exception.

My wife (Won-ok Kim) and I set aside about two hours this afternoon to participate in the Friends of Sligo Creek “Sweep The Creek Litter Pick-up” for families looking to do some socially distant good for Mother Nature in the coronavirus era.

“We’re trying to organize some informal cleanups,” our neighbor and FOSC Steward Ed Murtagh told us before we commenced. “Sligo Creek is really a gem, and we need to protect it.”

The goal was to remove as much trash as possible — bagging it and bringing it to the nearest Montgomery Parks trash bin. We’ve written extensively about the plague of plastic pollution in Sligo Creek, and we often pick up bits of trash on our daily walks, but we got serious today — filling up two and a half large trash bags with about 70 pounds of garbage in less than two hours.

We could have filled more bags during our Sligo Creek cleanup, or filled the same number in less time, had we really stayed on-task. As professional storytellers and amateur naturalists with a great love for sauntering Henry David Thoreau-style, though, we would’ve been derelict in our duty if we hadn’t taken the time to stop and smell the flowers whose names we don’t yet know. We put on our fancy new knee-high rubber boots and hopped in the creek — focusing on the Wheaton end by the stormwater retention ponds. It’s also the area that became our second home while chronicling the hope and hardship of an expectant mother Canada goose whose life proved far more intense than we ever could have expected. We could have worn regular boots and just removed trash alongside the trail, but it was definitely more fun to splish-splash in the water.

Dropping down into the gully gave us another chance to experience how much the creek and surrounding landscape changes daily.

All the recent flooding created more stormwater runoff, which flooded the creek and caused more erosion — causing more trees to topple over and leave exposed root clumps behind. We spotted one clump that created a great hang-out spot for minnows, which, unfortunately for the minnows, in-turn creates a great place for raccoons to dine. Unfortunately for the raccoons, this creates a great place for foxes and owls to chow down. The raccoon skulls I find in the area are constant reminders that the circle of life is always churning in Sligo Creek.

Unfortunately for a whole lot of critters, the stormwater runoff also brings floods of nutrients from lawn fertilizer and animal manure, among other things. This gives life to algae blooms that suffocate the water — stripping the oxygen from it and causing death for fish and other life forms that live in the water, and starving the creatures that rely on the creatures in the water.

Won-ok and I continued our good deeds, searching high and low for trash. “High,” you ask? Yes. Fallen trees held plastic bags at or above our eye level while we were in the gully. We also spotted bags and dryer sheets clinging to tree limbs 20 feet over our heads. Plastic rings that hold six-packs of beer and other beverages hid in the grass and sand all through the gully and woods. Birds ingest those plastics and others, so every piece of plastic we yanked out of the creek helped save the lives of our feathered friends.

Excavating trash from the creek bed drew us close enough to spot things we would never have seen from atop the banks. A bunch of little slimy brown things with spots on their backs and short little legs stood motionless, with their bulging black eyes staring up at us. We gently picked one up to take some photos and honestly weren’t sure if it was dead or alive. We didn’t know enough about creek critters to know what it was, prompting us to seek help from mentor Murtagh of FOSC. He wondered if it might be a northern two-lined salamander. He sent us a link to an Arcola Elementary School activity with the Montgomery County Department of Environmental Protection. Students found the salamander in the area, so maybe we had, too.

Minutes later, I looked down and saw what I thought might be a mirage. That’s how The Great Mollusk Mystery of 2020 began. Had I, your humble Sligo Creek field reporter and a man only half-way through the Maryland Master Naturalist program offered by the Audubon Naturalist Society, just become the first person to discover a sign that the creek had achieved a historic level of health? Had I just found a specimen that would change the very nature of how we understand Sligo Creek?

I promptly sent photos to FOSC President Michael Smith and FOSC naturalist extraordinaire Michael Wilburn. They applauded me for my effort but dashed my dreams of a Nobel Prize as gently as they could: The shell in question was likely one from a plate of mussels served by an Italian restaurant — or perhaps even an appetizer from the Portuguese cafe Nova Europa, located in the Kemp Mill Shopping Center, straight up-hill from where I stood.

Back to bagging trash we went.

We picked up a brewery’s worth of beer cans and bottles, heaps of plastic water bottles, and ubiquitous plastic bags — including some that barely poked out from the creek banks. We tugged at them like magicians pulling unending handkerchiefs from our sleeves. It can take one thousand years for a single bag to decompose. We removed drinking straws, broken glass, face masks, latex gloves and diapers. Plastic diapers take five centuries to break down.

We retrieved the remnants of an entire meal in one spot — the plastic carton from a frozen dinner, an empty hot sauce packet and an aluminum beverage can.

We scooped up what was left of a leather piece of Nike sporting equipment, then turned our heads to find a man’s leather loafer — a poignant sign of man’s callous footprint on the watershed.

We rounded a corner and …

A startled adult great blue heron and an immature heron flapped themselves up and out of the creek and high into the autumn sky. Won-ok and I reveled in the sight of the two majestic birds as they circled the retention ponds and soared to the horizon. We love herons. One sweet old great blue heron gave us the name for Eye On Sligo Creek on New Year’s Day this year. We watched another gulp down a fish, then wrote poems about it.

We caught our breath just in time to turn around and see a green heron land on the top of a snag — the ecological name for a still-standing dead tree. Green herons have given us great memories, too.

Our euphoria led to distractions for me.

I turned to make my way out of the retention pond area, except that I forgot where I was standing while watching the birds. I mistakenly took a step to my right instead of forward and sank almost to my knees in cement-thick mud. Won-ok laughed heartily as I tried to heave myself out of mud trap, then cracked up even harder when I repeated my mistake two seconds later. In my defense, I sank myself the second time after I had successfully retrieved one more water bottle from the pond. The mud trap and my wife’s laughter inspired me to film another video segment for this story, so that was another plus.

Won-ok and I slung our heavy bags of trash over our backs and trekked out of the woods — high-fiving when we reached the Montgomery Parks trash cans. An elderly woman walking by looked at our bags and our muddy boots and thanked us for our effort. We didn’t quite know what to say because nothing about our afternoon of volunteer work felt like labor. Not the bending, cleaning, hauling or sweating. It was impossible to stroll home thinking we had done anything selfless — not after receiving so many gifts from above. 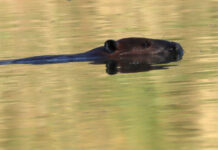 Fuzzy Brown Face – And Will I Get Eaten By A Giant Frog? 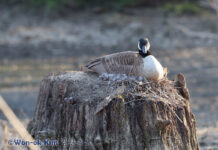 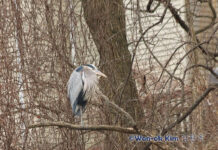